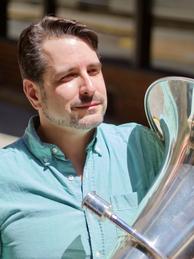 Originally from New York, Steven Bontempi began his musical studies at the age of nine when he decided to play the tuba in the 4th grade. Under the tutelage of many fine musicians in the greater New York area Mr. Bontempi developed into a fine tubist, earning awards, scholarships, and accolades for his performance in large ensembles, chamber groups and as a soloist.

In pursuit of his musical education, Mr. Bontempi was accepted into the Hartt School of Music where he had the opportunity to study with Stephen Perry of the Hartford and Springfield Symphonies. In 1992, Mr. Bontempi graduated from The Hartt School with a Bachelor’s Degree in Music Performance. Over the next few years, Mr. Bontempi played as a freelance musician, primarily in New York, Connecticut and Boston, Massachusetts. With his thirst for knowledge, Mr. Bontempi pursued not only his musical interests but also his interest in the law, earning a Doctor of Jurisprudence degree from Seton Hall University School of Law and both a Master of Music Performance Degree and an Artist's Certificate from Georgia State University.  Over his career, in addition to Stephen Perry his primary teachers also include Joseph Pergola, Tim Hogan, Dr. William P. Mann, and Eric Bubacz.  Additional experiences include study with Adam Frey, Warren Deck, James Gourlay, Aaron Tindall, Ron Davis, Andrew Hitz, and Patrick Sheridan.

Mr. Bontempi’s musical and academic interests continued to develop over the years giving him a unique perspective to share with his students. Although he currently lives and works in the greater Atlanta area, Mr. Bontempi has performed on the tuba in concert halls and universities across the United States, Europe and Southeast Asia. He is currently the Principal Tubist in the Cobb Wind Symphony and plays with various brass quintets and chamber groups in the greater Atlanta area.  Mr. Bontempi can also be found providing leadership in the classroom and concert hall at the Georgia State University School of Music and Oglethorpe University.

The Atlanta Tuba Studio was founded and is run by Mr. Bontempi with the idea that student needs always come first. The purpose of the studio is geared for the development of tuba players regardless of their skill level. However, Mr. Bontempi’s students often find themselves in leadership positions and principal chairs in their school, All-State, and Honor Ensembles as well as college and beyond. His ultimate goal is to share his training, knowledge and love of music with all of his students. Mr. Bontempi specializes in private lessons on tuba and euphonium, low brass sectionals, coaching and master classes. Each individual lesson or group experience is designed with an emphasis on the respective fundamentals of each instrument.